“Different forms of trafficking can be hidden under the dominant image of a girl or young woman trafficked for sexual exploitation … Practitioners expressed concerns that this may overshadow awareness of trafficking for other forms of exploitation, including benefit fraud, forced marriage, domestic servitude, work in cannabis factories or nail parlors, as well as masking the trafficking of boys and young men.” – Pearce et al (2009) Breaking the Wall of Silence

“Boys are more looked upon as perpetrators, particularly if they are already in the youth justice system and have committed an offense.” – Police Officer

“These sorts of networks and journeys, they are by the nature of it criminal underground and there are some unpleasant people involved in that and these [young people] are very helpless, very vulnerable people with very little agency when they’re en route, so people will take advantage of them. People will think, “Yeah I can abuse that child, I can rape that child– who’s going to do anything?” – Director of Trafficking Project

Barriers to disclosure of sexual exploitation:

“For young men, there is more sense of shame, their manhood is diminished – and if they are from a more religious background, it could feel like it has gone against all their religious beliefs.” – Trafficking Practitioner

“The shortage of specialist mental health services for young victims of trafficking was a regular theme in interviews and was highlighted as another barrier to disclosure for many young men. Practitioners explained that mainstream counseling was often not appropriate to address the needs of trafficked boys and young men, but that referral to specialist services usually resulted in long waiting times, compounding the trauma felt by a young person and inhibiting the likelihood of a disclosure of sexual exploitation.” – Boys Don’t Cry: Improving identification and disclosure of sexual exploitation among boys and young men trafficked to the UK 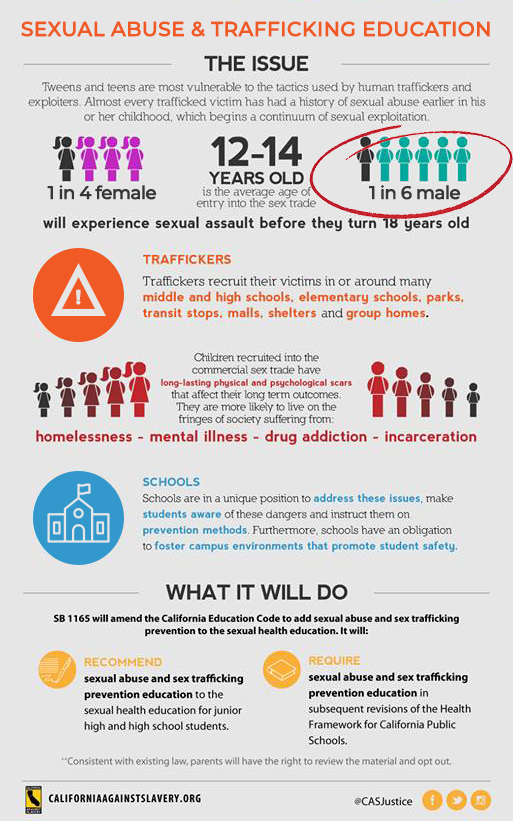