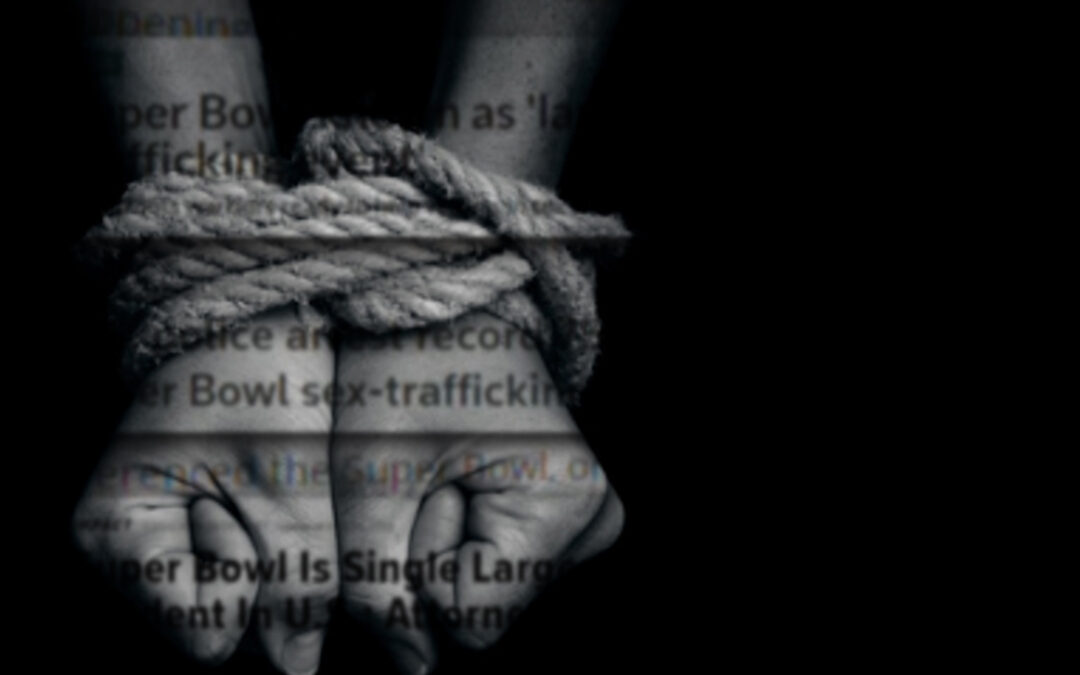 Sex Trafficking and the Super Bowl

Super Bowl week isn’t just the biggest, holiest and most publicized event of the year for America’s sports fans.

It’s a myth that the Super Bowl is the country’s largest annual sex-trafficking event.

Every sports championship, convention or city where men with money go in large numbers attracts professional sellers of illegal sex from around the country.

But there’s no doubt that thousands of them flocked to Atlanta for Sunday’s Rams-Patriots matchup.

But Atlanta is no stranger to the illegal sex-trafficking trade. Like Los Angeles, San Francisco and San Diego, it has been a center of human sex trafficking activity for years.

According to the FBI, its predators specialize in children from Mexico. The statistics on human sex trafficking are not easy to get with precision, but they are grim.

The second largest international crime industry behind illegal drugs, human trafficking reportedly includes 40 million people and generates $32 billion in profit a year, half of which is in industrialized countries.

According to the U.S. State Department, as many as 800,000 people are trafficked across international borders every year, including an estimated 15,000 into the United States.

In the United States the average age of a teen who is forced into the sex trade is 12 to 14 years old. Many of them are troubled runaway girls who were sexually abused as children.

Many are graduates of our horrible, broken foster care system. As I’ve said before, if you really want to fix sex trafficking in America, you have to first fix foster care.

Each year, like a baseball farm system, it feeds the sex-trafficking industry with a steady stream of fresh prostitutes. Many are recruited by their friends who aged out of foster care at 18 the previous year.

In 2014 I wrote a column about sex trafficking and the Super Bowl with Jerome Elam, who at 5 years old was forced by his stepfather to become a sex slave for pedophiles in Florida.

Elam, who was also coerced into child pornography and forced to take drugs, attended school and appeared to be a normal kid.

He only escaped from his hell after a suicide attempt — at age 12 — landed him in a hospital emergency room. Today my friend is a writer and child advocate who speaks around the world about the evils of sex-trafficking.

We don’t hear much about America’s sex-trafficking business in the mainstream media except when the Super Bowl Sunday rolls around.

You might read a report in USA Today or online about some arrests, but the big newscasters, the cable shows and the sportscasters are not going to touch the sex-trafficking issue, much less get outraged by it.

That’s the tragedy. Everyone says over and over they want to save the children from sexual predators, but that’s a lot of BS.

The only way sex trafficking in the United States is going to get the publicity it deserves is if some famous sportscaster or bigwig politician has one of their kids kidnapped and sex trafficked.

Then they’ll call for Congress and everyone else to do something about the sick men in our midst who pay to have sex with children and the evil creeps who make it happen. Until then, expect crickets. Absolute crickets.

Super Bowl Sunday is a good time for the media to start talking seriously about human sex trafficking and what to do about it. But let’s not forget about it on Monday, because the traffickers won’t.

If you would like to nominate a survivor or advocate
to be a featured on our website e-mail a
request with all details included to:
jerome@traffickinginamericataskforce.org

ABOUT THE AUTHOR: Michael Reagan is the son of President Ronald Reagan. He is a political consultant, founder and chairman of The Reagan Group, and president of The Reagan Legacy Foundation. He is the author of “The New Reagan Revolution” (St. Martin’s Press). Visit his website at www.reagan.com. Michael additionally is on Trafficking in America Task Force’s Advisory Board and an advocate to stopping human trafficking, especially when it comes to the silent voices of our children.

ORIGINAL ARTICLE APPEARED AT THE SENTINEL ON FEBRUARY 5, 2019: https://cumberlink.com/opinion/columnists/reagan-sex-trafficking-and-the-super-bowl/article_eeaf6767-4b0c-5333-9e3f-8f05bcd4c960.html